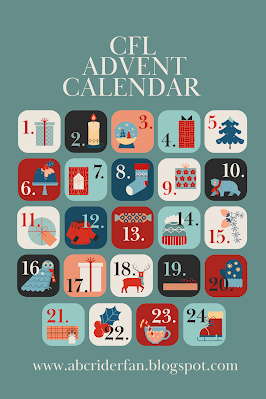 Fridays around here are either for football or flashbacks and sometimes it's both!  I've had a flood of ideas recently and I was thinking about a post I wrote called CFL Subscription Club on ABC Football.  The entire blog is talking about how you can subscribe to all kinds of services to bring you monthly boxes of anything from food to underwear and my argument was why doesn't one exist for the CFL?  Well, since it's Christmas, this got me thinking, (by the time you read this I'll already be into my advent calendars) why doesn't a football, a CFL in particular, advent calendar exist?

Well, likely because no one in marketing has thought of it.

Imagine, as Grey Cup hysteria winds down, that you could purchase a CFL advent calendar.  24 days of CFL football items behind little doors of some kind of football themed box.  Hey, I can't have allll the ideas now, can I?  I'm not talking about big ticket items, but I know for a fact that the Roughrider Store has pins, stickers, tattoos, earrings, keychains, Christmas ornaments and likely other small items which would tuck very nicely into a decorative box.  December 1st you scramble over to your CFL advent, peel back the door and reveal...

With my luck it would be a Blue Bomber pin.

Every person who purchased an advent calendar would end up with a nice collection of memorabilia from all 9 CFL teams.  The items could be traded on social media and Facebook groups.  Fans could wear their items to events for the upcoming season.

"Hey, where did you get that cool Gainer pin?"

"Oh, it was in my CFL advent calendar!"

The entire Christmas Countdown calendar would culminate in day 24 where there could be a coupon to be redeemed in team stores!  Then every fan could flock to their local team CFL store on Boxing Day to purchase an item of their wildest dreams.

My little green Roughrider heart swells with the thought of it.  Let's face it, there hasn't been much for us Rider fans to be excited about this last year.  It's too late for this year of course with Christmas already a couple weeks away, but hey, CFL get with it - get with the times.

Something like this could be marketed for the countdown to the 2023 CFL season and debuted during training camp and then the 24th door of the calendar would coincide with the home opening weekends...

...but I'm just the ideas person.  Just a fan.  Just a girl writing little ol blogs - wishing there was something football related to go with her tea and jam Advent Calendars.

I Don't Even Know You Anymore

No, not that!  An opinion, silly!  Yes, everyone across the CFL has big time opinions on the last round of CFL games and especially what happened in the Roughriders Redblacks game.

What happened you ask?  Well, if you're the one soul who doesn't know and hasn't chimed in here is what happened.  Very late in the game Garrett Marino tackled Jeremiah Masoli low and chaos ensued.

I'm not here to rehash everything because I'm sure you can cruise the internets and find everything out.  It was the twist.  It was the celebration.  It was previous plays.  It was the history.  Blah blah blah.  Regardless of what it was and how you viewed it - it happened.  There's nothing we can do about any of it.

It's in the leagues hands now.

...which, by the way, they seem much more anxious to assess the situation than a few others - "ahem, cough cough Simoni cough cough".

I admit, personally, my initial reaction was one of  "ohmygoodness, he needs to be gone" but after some time the shock wore off and after a few days I've evolved.  I really don't want Garrett Marino gone from the Roughriders team.  I never want to see someone lose their job.  I will never advocate for that unless they've been caught doing something illegal.  Now, if you're looking for people to be reasonable social media isn't the place to see it.  I know that.  The outpouring of pure rage though is mind blowing.  I've called it a witch hunt on ABC Rider Fans because I really don't know another way to label it.  I've seen Hamilton TigerCats fans delving into college social media accounts and sharing things about previous behavior.  I've seen Jeremiah Masoli's mother posting what could almost be seen as threats.  I've seen Farhan Lalji reporting and in my opinion, leading the mob on the subject.  Anyone who dares to even show a shred of Roughriders support, we/they are immediately shut down.  No one wants to hear another perspective.  There's only support for suspensions, firings, fines, bans etc etc.

I don't even know this CFL fanbase anymore.

I really don't understand how or why things have changed so drastically.  The fanbase I used to know went to bat for it's players.  We defended them.  We weren't the ones leading the charge to get them released.  Maybe you find that stance foreign and so be it if you don't like what I'm saying but if we don't support our own players on our own team who is going to do it?!  Other players have come out in support and it's highly unlikely they would if the allegations are true.  Why is everyone so quick to call it all lies?  Nothing is to be believed anymore.  It's sad.  Very very sad.

I'm just a girl over here writing a blog.  I drink tea.  I love music.  I watch football every week.  I don't expect you to agree.  I don't expect a following.  What I'm asking of everyone is to be fair and reasonable in their assessment of the Roughriders and Garrett Marino.  We are messing with someone's livelihood here so please, check your emotions and words.  A raving lunatic on social media is no different than a player pumping the air as he's escorted from the stadium or a CFL Head Coach storming the bench of the opposition.

Guess what?  Social media isn't real life and even though I'm administrator of a really great Facebook group I know fully well that the people working today and shopping today don't care about this at all.  Let's hope we can all move on and put this behind us as well because there will no doubt be something new to be outraged about by Friday.